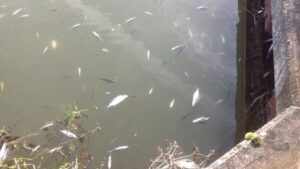 The week commencing 5th April saw strong Northerly winds coupled with spring tides causing what is known as tide locking across the Broads, with several tides effectively being held land locked within the rivers Bure and Yare. The result is a push of this saline sea water up the rivers reaching areas not normally impacted by sea water.

John Currie and team have been out taking measurements with the surge reaching Martham dyke on Thurne, Wroxham Broad on the Bure and Ludham bridge on the Ant to lethal levels to freshwater fish in the stratified water column. It seems however that there remains areas of safe water in the margins and top of the water column, so hopefully some fish can get protection.  There are reports of dead fish across all 3 rivers however. In the open water of Norh Walsham broad also at lethal levels in parts as was recorded in Ranworth broad.

Retired fisheries staff state they have never had lethal levels so far upstream in EA history. Not good times for the broads and if we look at the Broads Futures imitative, clearly this is the future without any form of intervention. Yet the statutory bodies continue on the strategy with bio-manipulation and fish don’t matter ethos.

Update 12th April, readings of 30,000 micro Siemens from outside the entrance to HGB clearly shows the impact of this latest surge, What role HGB was in terms of a retreat away from the surge we will never know, nut any fish barrier would clearly leave the fish with nowhere to go.

Whilst the EA failed to deploy the barrier at Herbert Woods on the Thurne for whatever reason. This whole saga needs a complete review in how we can muster a response going forward.

Update 21st April, many people have continued to highlight the images of dead fish on both the Bure and Thurne systems. It’s really not possible to place an estimate on the numbers, but we are talking in thousands rather than hundreds. Yesterday the 20th April, many dead snails were seen floating on the incoming tidal flow up the river Ant. So the impact on the ecology is quite severe and not just related to fish. 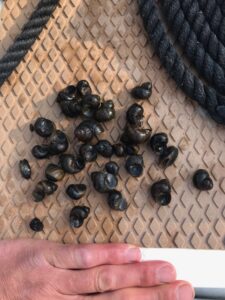 Myself and John Currie met the the EA management team yesterday, who informed us that an internal review on the event is being undertaking. We made a request on two separate fronts.

Firstly that a formal resourced management plan is put in place to ensure both proactive and reactive measures can be implemented wherever possible. This should be mirrored on that used by colleagues in the west who proactively manage poor water quality on the Ouse Washes and River Delph.

Secondly that the Environment Agencies Fisheries, Biodiversity and Gemology team have representation on the Broads Futures Initiative, so that technical impact on the ecology is both captured and fed into any long term adaptive measures or solution to save the freshwater ecology and habitat.