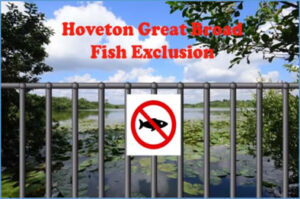 Some of the latest progress with the ongoing saga unfolding in the Broads.

Justin Neal, solicitor at FL said, “it is extraordinary that the body responsible for the protection of sensitive sites has been caught putting in fish barriers without permits and planning permission. When will NE begin to use its position and budget in a sensible way by concentrating on stopping the causes of pollution, rather than chasing an unproved and damaging project?”

Kelvin Allen Chair of BASG states, “We continue the journey and saga over this issue and as the recent saline incursion proves the need that successful fish recruitment is critical to the sustainability of the broads fish stock with it’s challenges from nature, let alone man with this proposal.”

Another Challenge on the Hoveton Saga.
19th February 2021