During the spring of 2015 a large algal bloom of Prymnesium parvum existed within Hickling Broad and the Upper Thurne system. This led to the Environment Agency undertaking one of the UK largest fish rescues of over 700,000 fish[1] which was widely reported in the national media[2]. However, many thousands of fish were lost, including large Bream and Pike.

Since then a task group from the Environment Agency, Broads Angling Strategy Group, Broads Authority, Natural England, Pike Anglers Group, Broads IDB and scientists from John Innes Centre have been working through a number of issues on how to deal with this in the future under a number of themes.

This paper is intended to provide Broads users and stakeholders with an update on the positive progress, its impact and the excellent world leading scientific work being undertaken.

The group reviewed the critical locations where fish aggregate and become trapped to avoid the lethal toxin released by Prymnesium. A new control mechanism on the existing drainage pump has been installed at West Somerton dyke to provide an instant controlled source of fresh water to sustain aggregations of trapped fish.

Other locations have been identified and detailed plans created to bring in portable pumps to provide sources of fresh water to sustain fish. These refuges should help to reduce the need to move fish as before, which can cause additional stress. However the Environment Agency may still rescue fish in extreme circumstances.

Scientific research undertaken across the Norwich Research Park, has found that dosing the algae with low levels of Hydrogen Peroxide successfully destroys both the algae and the toxin in laboratory tests. So, small scale trials using Hydrogen Peroxide dosing are included within the incident response for any future incidents. This is already the existing proven technique the Agency uses for resolving low dissolved oxygen levels. So, this will help on two fronts with these large fish aggregations.

The Broads Angling Strategy Group and the Environment Agency have been working with John Innes on Prymnesium research for a number of years. However in the last 12 months some sound progress has been made in what is the complex and little understood world of algae science. Previously detection of Prymnesium parvum required time-consuming manual counts of these minute 10 micron cells through a microscope. This therefore, placed limitations on the volume of water samples analysed and poor provision of volumetric analytical data.

Recent work carried out at the Norwich Research Park has led to this process being automated using qPCR[3] techniques, a DNA amplification method to undertake cell counts from bulk water samples.

Plans have been implemented to undertake a much more focussed level of water sampling and cell count analysis across the Upper Thurne, so trends in algae levels can be better assessed along with other factors like temperature, salinity and water nutrient levels. The scientific team have engaged with local anglers and volunteers to undertake this water sample collection which is real citizen science in action, with well over a hundred water samples analaysed already.

The whole life cycle of Prymnesium is still not clearly understood. Neither is why the toxin, which is lethal to fish, only occurs under certain conditions. Current thinking is that the Upper Thurne algae comes under threat from a highly specific algal virus which kills the cells and releases the toxin.

Previous intentions to produce a real-time field detector of the toxin is now felt not a worthwhile solution, as the damage would have already impacted the fish. 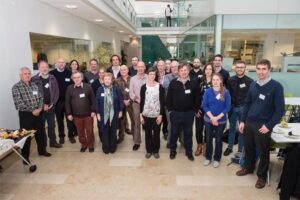 Focus is now on detecting the potential indicator prior to the release of the toxin, so management intervention can be implemented avoiding impacting the fish.

The image left is from the open event at the Norwich Research Park on the 5th Feb, where much of the current research was explained and demonstrated.

This was seen as a critical issue, following the previous event when unfortunately little or no factual status was provided due to restrictions on communications during the pre-election period. We have agreed with the EA that their communications team (where possible) will now issue formal media briefings on the impact and status on any future event. This will provide a single source of what is actually happening and avoid rumors as occurred in the previous incident.

“The Broads Angling Strategy Group have also been working with the local match anglers and produced a trend in match catches from 2012 for the Upper Thurne Potter Heigham to Martham.” 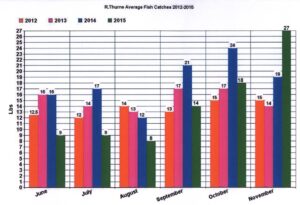 In 2014 this ratio changed to a 50:50 spilt, however in 2015 a higher proportion of small Bream were prevalent in all catches. November 2015 showed a high proportion of large Bream in the river system.

Although this shows some impact in the early season of 2015, the match catch returns restored to previous 2012 and 2013 levels by October, albeit with a change in species from Roach to small Bream. This shows that nature is a wonderful thing and it is remarkable how these coarse fish stocks can recover. It also reflects the potential long term success of last year’s unprecedented fish rescue by the Environment Agency.

Evidence on Pike is not quite so revealing, with poor catch returns reported by all pike anglers. This is currently being scoped for further study within the Broads Pike Tagging project.[4]

The Agency undertook some underwater surveys of fish stocks in the Upper Thurne in both June 2014 and Oct 2015. The results of these also reflect on the healthy fish populations.

The map below is part of the Oct 2015 survey on the Upper Thurne impacted by Prymnesium.

The Survey shows that river Thurne overall has an average fish density of 163 fish per 1000 Sq Metres and of the 15 rivers surveyed nationally, only the river Avon has a better fish density. This supports the volumes reported in the actual match catch weights.

The Prymnesium only impacted on a small area of the Broads National Park and the evidence is that it remains one of the best natural river coarse fisheries in the UK, with healthy fish populations.

Prymnesium parvum has been naturally sustained within the Upper Thurne for over 60 years, with blooms and toxin release occurring as a 1 in 5 year event. So the total removal may prove challenging.

Focus remains on understanding the life cycle and implementation of how best to deal with any incident whilst the science continues to understand the longer term management techniques to control and manage its life cycle. 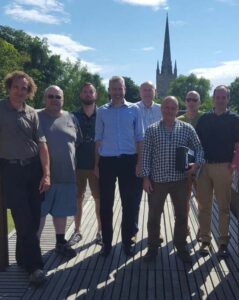 On behalf of the Broads Prymnesium Working Group

Pictured From Left to Right