One of the best venues on the southern broads is on the river Waveney at Beccles Quay on the Suffolk bank. This venue has supported anglers for the past 50 years with little issues with the anglers and boaters working together with both enjoying the river. 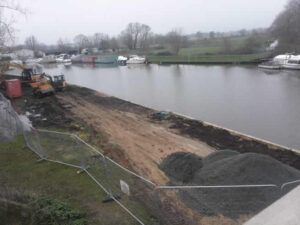 As such focus has returned to providing moorings along the quay to generate income and capital to enable the whole 400 metres to be restored.

How can the anglers continue to enjoy this facility as a free asset, when boaters pay considerable fees for moorings is the hub of the issue?

The Broads Angling Services Group CIC was instigated to look after the interests of Broads angling, formed in 2017, with places like Norwich and Beccles offering vital urban angling opportunities.

The core of this is that angling on the Broads remains mostly free and as with Beccles Quay how does angling in the 21st century pay its way, when a mooring will cost £500 and boat toll £500, can anglers expect the same facilities for an annual national fee of £29 rod licence to the EA.

We have opened discussed with the landowner, but if anglers need space and therefore less moorings and income. Would they be prepared to pay for this shortfall?