Well I’ve been banging on about climate change for many months on this blog and these past few weeks has finally brought the message home to us all. We have seen flows in our rivers some of the lowest, with many fish in distress and many of the tributaries even dry. This is seemingly now impacting on the Broads tidal rivers, with little freshwater flow keeping the tidal influence of saline at bay. We have seen a slow but sure increase in salinity levels 10kms upstream to levels 3 times the norm. Not at critical lethal levels for fish, but sustained and continuously progressing upstream.

Both Duncan and I went on the BBC to discuss this recently.

We have recently secured some funding to implement a bespoke salinity probe solution and communications package, which if proven successful in it’s trial has the potential to deploy a whole bunch of these probes to monitor salinity right across the Broads using it’s own radio mess network. Our member Simon Slater and his company are leading on this. Currently nobody has any scientific understanding or models that can represent this and how with rising sea levels, salinity is going to evolve within the Broads and how it can impact on its ecology. We believe this could the answer in being able to further model and understand the impact.

There has been lots in the media about drought and water conservation or the lack of it, however Anglian Water still are saying THEIR supplies are generally fine. This communications stance was challenged at the highest levels within the national drought group chaired by DEFRA on the 13th Aug.

But their manta continues that they are fine and their reservoirs stable. This isn’t the case on the river Wensum as all their water is abstracted from the environment either through surface or groundwater.  Even their own teams at Taverham Mill are pleading with us to save water.

We have now reached a point where average daily water temperatures are above the critical 21° C so damaging for Pike. But does this stop anglers catching them I ask!

Our exploration into the feasibility of introducing a Broads Angling Permit scheme, has led to the engagement of Fish Legal and we hope to have the matter put before Queens Council by Christmas.

This would provide the legal framework to either continue with unsustainable free fishing or progress this forward into some form of permit scheme.

We have significant ideas to move this forward, but without a revenue source nothing can be achieved at the scale needed.

Get Fishing the Broads 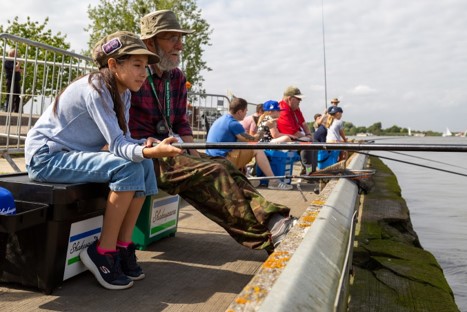 Last Monday the 22nd we ran our 1st Get Fishing event at Oulton Broad, with 26 kids having a great time, trying their hand at fishing for the first time.  Great to see so many smiling faces and my thanks to all who helped run the event.

Its now raining as I write this.

That was some September.
30th September 2022

Summers here and with it some concerns
19th July 2022