This is to provide you with an update following the outcomes from our Wensum Stakeholder Workshop last October and progress to date. Despite COVID-19 we have made some sound progress. We have established a governance structure and secured budget for a Wensum Project Officer to oversee many of the projects defined by our stakeholders. 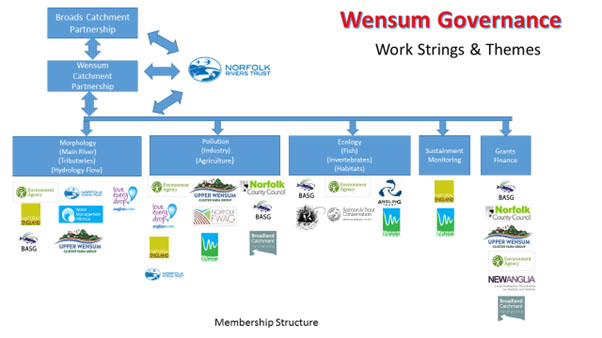 The Wensum Catchment Partnership will meet as a steering Group every 6 months, facilitated by the officer employed by Norfolk Rivers Trust, we will need to agree who will represent and attend this group overseeing and ensuring the Wensum doesn’t lapse back into silo working within its stakeholders.

Our key focus for this year will be understanding the source of siltation and chemical ingress in the upper catchment of the River Tat, some 6.7kms and 8800 Hectares. This will enable focus within a relatively small area with only 3 villages covering the parishes of East Rudham, Tattersett and Tatterford. This will therefore be our initial community engagement and citizen science area.

John Flowerdew a Councillor from Costessey will be leading on this and is currently liaising with the Welland Rivers Trust who have already gained knowledge from setting up community groups and any lessons that can be learnt. He is being assisted by Prof David Harper in finding the most appropriate way forward.  This sits within a real jungle of initiatives all lead by different environmental groups, all attempting to achieve the same outcomes, but with differing approaches.

In parallel with this, the National CaBA group led by the Rivers Trust are also offering new support on igniting citizen science and empowerment of local communities by making them part of the decision-making process in their local environment. This community and citizen science is really key in us making a difference and step change from the years of costly consultants producing pages of material for it only to sit on a shelf, with zero outcome.

This is why we felt the adoption of the CaBA approach for the Wensum would bring about a step change.

The leg work on the ground with landowners will be delivered by the Wensum Project Officer, supported by farming adviser colleagues once in post. The following map shows the area in question, which includes 3 sewage treatment works and a natural sloping river valley. 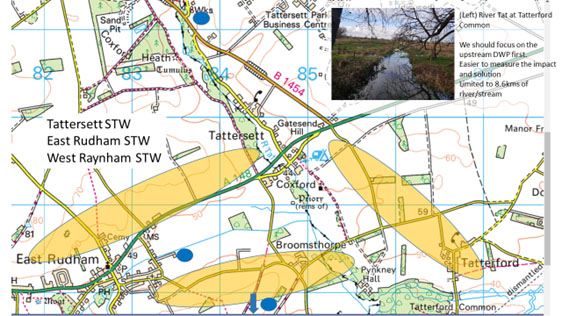 The 2nd element of focus is on the Wendling Beck between Dereham and Worthing. 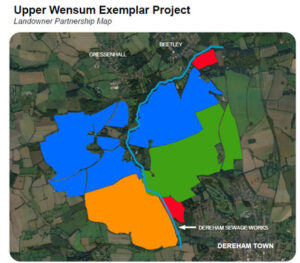 This catchment has a significant land holding of the Upper Wensum Farming Cluster Group and will look at short and medium term measures to reduce soil and chemical runoff. For the long term approach Norfolk River Trust has scoped a landscape scale scheme to change the way the land is managed, whilst also capturing the Phosphate from the Dereham Treatment works.

The third element is one of two specific point sources within the Blackwater catchmemt.

In parallel to this, our volunteers have just started a new Riverfly sampling regime at 5 points along the river: Tat at Tatterford , Wensum at Helhoughton, Wensum at Dunton, Wensum at Sculthorpe & Wensum at Swanton Morley. We will be pulling together a specific article on this in the coming months to explain the methodology and process.  Hopefully this will link nicely into the citizen science program mentioned earlier.

During this COVID lockdown, things have been happening with Anglian Water in terms of its current 5 year investment plan AMP7, which OFFWAT believes the company is seeking to invest some £740m more than they expect. This investment does include some huge investments in the Wensum Catchment and current analysis is that it removes around 76% of the phosphate load by 2025.

A further consultation with Anglian Water has also just closed, which scopes further investments in Sewage Treatment Works for the next 25 years, for the Wensum if Swanton Morley was included then from today’s figures only 5% of the Phosphate load would remain from today’s figures.

One area of concern remains the growth in housing planned along the Wensum Corridor and is this adequately covered by future water company investment plans. We have recently shared with the Wider Greater Norwich development plan, a case study in which developers pay an environmental levy to protect the surrounding SAC/SSSI.     The AMP7 program also includes improvements in 12 abstraction points within the Wensum Catchment. This is to maintain the requirements of the river being a SSSI.

The map below defines the specifics. 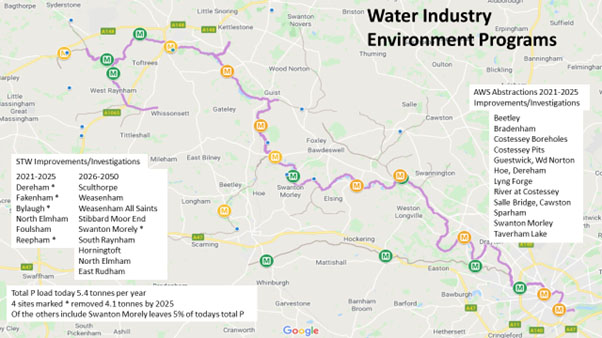 Most of the other initiatives have suffered due to the COVID lockdown.

Once we have secured the Project Officer, I’ll arrange a virtual zoom conference to agree the next steps.