During the spring of 2015 a large algal bloom of Prymnesium parvum existed within Hickling Broad and the Upper Thurne system. This led to the Environment Agency undertaking one of the UK largest fish rescues of over 700,000 fish which was widely reported in the national media. However, many thousands of fish were lost, including large Bream and Pike. 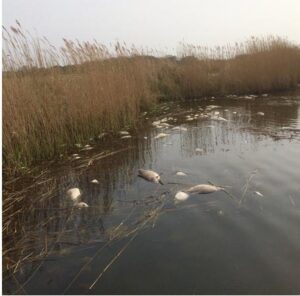 We have continued to lobby the Environment Agency on the findings following our key work with the UEA in establishing the cause and solution for managing future Prymnesium outbreaks across the Broads.

We are pleased that the Agency are now equipped with kit and the procedures to manage such incidents going forwards, following the recommendations from the UEA team.

Hopefully this is a scene we won’t see again within the Broads.

We are now looking at the more long term water management issues across the Upper Thurne and how these can be improved as part of it future management and investment.