Many anglers and people with an environmental interest will be concerned over the breakout of Pyrmnesium algae within the upper Thurne. The Environment Agency has today (1st Mayl) confirmed the rescue of some 700,000+ fish across the Thurne system. However an estimated 15,000+ fish have been lost. The map below shows where the impact is and major fish rescue locations. There have been no significant signs of fish in distress since the 22th April. 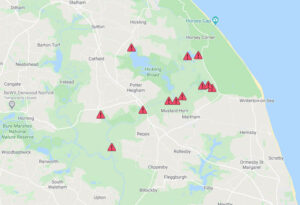