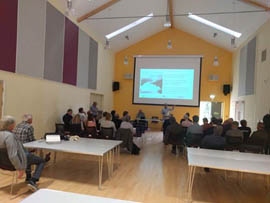 33 Stakeholders took part in an engaging session held at Bawdeswell Village Hall.
The day started with an exhibition in the adjacent activities room, with displays from WACA, EA, BASG, Chris Turnbull and others informing people of the history, reference material and images and sounds from the Wensum Valley.

The workshop started with an introduction from Cass Singleton a member of the BASG CIC, who helped compile the basis of the workshop based around a report on the Past Present and Future of the river Wensum. 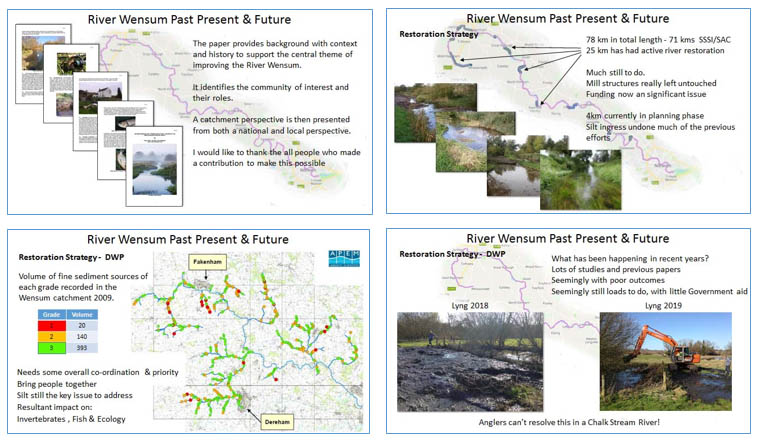 This was followed by a series of presentations from Kelvin Allen, the Chair of BASG CIC, who highlighted some of the report’s findings and challenges facing the Wensum.

He then went on to explain how changes in governance adopting an operational catchment based approach with engagement across all stakeholders could bring together society for the benefits of the river and its surrounding environment and people.

Finally some proposals were presented on potential governance structures to enable this, which would be the basis of the afternoons syndicate exercises. An engaging question and answer session was then facilitated by Paul Allen, with 3 key points recorded for later reference.

After a working lunch, delegates formed into 3 working groups based around 3 themes.
Pollution
Morphology
Ecology

Paul Allen then asked delegates to work through 3 syndicate exercises scoping Objectives, Outcomes and Governance Structures for each theme.

I would like to thank all the delegates who attended and made the day both engaging and meeting all its expectations and outcomes as above.
A special thanks must go to John Mallen and his team at the Village Hall who looked after us admirable through the day, with its excellent facilities. Whilst the ongoing support from Cass, Rory and Neil have made this possible.

I received the following feedback from Tim Ellis, long time Wensum conservationist and angler reflecting on the day’s events.

Many thanks to Kelvin and Cass for arranging and organising this, working with a professional facilitator, Paul.

From the perspective of an angler and conservationist, with involvement of varying degrees in fisheries and restoration work on the river for upwards of thirty years, this event was like a breath of fresh air! For years, especially in the early days of organisations like NACA, there was always an us and them atmosphere – us being the anglers, generally a long-haired unkempt bunch, and them being guys in suits. The guys in suits were largely the forerunners of today’s Environment Agency, variously labelled NRA, AWA, etc depending it seemed on what year it was, and historically they didn’t do conservation. We did, and there was always a clash, and every attempt to restore the river to a better environment for fish (and other things) was met with obstacles and red tape.

Nowadays of course, things are different. We still have our share of red tape, but thank goodness EA and now Natural England are these days on side with conservation.

Latterly we have had Anglers Consultative and Fisheries Action Plans, still sitting around tables with guys in suits, getting a bit less “us and them” as time moves on, but still the poor old Wensum is suffering from the ills inflicted by past generations of river engineers and a burgeoning human population. There are new, different, sticking points such as lack of funding and the constraints of working in what is now a SSSI/SAC designated site to be overcome.

The stakeholder meeting was called in an attempt to bring all parties together to form what is known as a Catchment Based Approach.

For the first time, we saw anglers, landowners, farmers, conservationists and statutory bodies all sitting down together and thrashing out approaches to solving some of the rivers problems. We talked about everything from Morphology, Ecology and Pollution, through Silt Traps, Cover Crops, American Signal Crayfish and Himalayan Balsam, to Beavers, Conduits and Constructive Wetlands.

The Morphology guys came up with a brilliant strap-line: “Sea-Trout at Swanton Morley”. I kept quiet but was tempted to suggest our group, Pollution, could use “Beavers on the Blackwater” but perhaps something less controversial like “Slowing the Flow”, (relating to field run-off) would have been more appropriate….

After the dust has settled, Kelvin and Cass are working to set up a formal group to run with the Catchment concept. Two eminent professionals have come forward to oversee Invertebrate and Macrophyte surveying, (including analysis of existing data) which will give us a monitoring system for the rivers health ongoing.

We hope this meeting will be the start of a new chapter for the river Wensum, a river for which we all care deeply and passionately.

We look forward into taking the outcomes forward together, making the Wensum a better place for all.