You may or may not be aware of the major project being undertaking to restore Hoveton Great Broad within the Broads National Park. This is a scheme being managed by Natural England to restore the Broad to its former state to support many water plants, which have declined in recent decades. The scheme broadly follows the techniques endorsed by the Broads Authority in its Lake Restoration Strategy, with the dredging and removal of silt followed by a period of bio-manipulation of cyprinid fish. This is a process used with limited success in many of the Broads over the last two decades to restore clear water and regenerate plant life.

The difference with this project is that it proposes to physically isolate the Broad from the river Bure for a period between 10-15 years. This isolation will be in the form of a barrier to fish and craft, but will allow the flow of water. Hoveton Great Broad is private and forms part of the Blofield Estate, it has very little public access and from an angling prospective, it’s one of areas that nature is free to nurture and develop away from man’s interference.

Both anglers and fisheries consultants have had reservations about this isolation since the projects conception and have secured £200k for additional science monitoring and a PhD to gain a better understanding of the wider consequences of this action on the whole catchment. This has led to numerous reports and clear evidence of the serious impact this would have on the fish, particularly Bream populations of the Northern Broads. We asked the world leading IFM (Institute of Fisheries Management) for their independent assessment on these proposals last June, which again enforced the damage this would have on the wider long term fish recruitment and spawning across the Northern Broads Catchment and the important role Hoveton plays in spawning.

These actions have been escalated to both Natural England and Environment Agency Regional Managers in writing, as the evidence is that this isolation would actually breach the water framework directive rules. But as yet no decision from the competent authority on issuing a permit to Natural England has been made.

We feel it is time to make all the Broads stakeholders aware of this position and the consequences it will have to both the wider Broads Ecology and more importantly the Social Economics that angling tourism brings to the Broads. 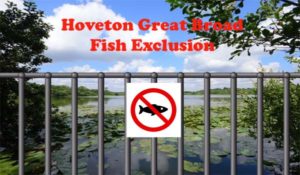 We will be starting a communications campaign shortly to raise public awareness and what the statutory authorities are proposing. The most recent communications on this is attached for reference.